From the intelligence gathering and missile firing drones used in the U.S. war on terror to the army of mechanical bomb-diffusers relied on by U.S. forces in Iraq and elsewhere, more of the operations traditionally performed by soldiers are now in the hands of machines. Will the robots eventually replace human boots on the ground? At least one American military leader thinks so.

Gen. Robert Cone, the man in charge of the U.S. Army's Training and Doctrine Command, said in 2013 that machines like drones and robots could replace up to a quarter of troops in combat by 2030. In an effort to become "a smaller, more lethal, deployable and agile force," Cone said the Army was considering reducing the size of brigade combat teams to 3,000 from 4,000 soldiers. The potential move would be made possible, according to Cone, by enhanced robot technology on the battlefield.

It's easy to understand the allure of robotic troops. War ain't cheap. In addition to the incalculable price that comes with putting soldiers in the line of fire, there is also the cost of training, feeding, supplying and housing them during active military operations. When the fighting stops, the bills for veterans programs, pensions and medical care continue to pile up. (A quarter of the 2012 Pentagon budget request was for benefits like these. Proponents say robot soldiers not only help keep humans out of harm's way, but also reduce the cost of operating and maintaining the U.S.'s military forces.

On the other hand, there are probably some things that robots just can't do. Or are there? Read on for a rundown of where robots are already supporting human troops and how they might be used in the future.

How Military Robots Are Being Used Now 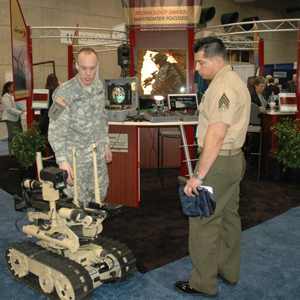 The U.S. is already using unmanned aerial vehicles to conduct surveillance and drop missiles on suspected terrorists overseas in places like Pakistan and Yemen. That's not to mention how drones have also been deployed stateside to check up on the folks at home. The efficacy and morality of these and other operations are controversial, but supporters say drones are less costly, minimize collateral damage and don't require putting American troops at risk. That's partly because humans can operate these machines – often in far flung, dangerous places – from the safety and comfort of a domestic operations center.

While drones do their work from high above, other robots are operating on the ground in battlefields worldwide. American forces relied on bomb-squad robots to inspect and defuse possible explosive devices during military operations in Iraq and Afghanistan. The remote-controlled machines moved via tank tread and featured infrared vision, multiple cameras, floodlights and mechanical arms in order to spot bombs and dispose of them, all while human operators stayed a safe distance away.

The U.S. military is reportedly testing a new breed of war robots, ones that are designed to go out in the field with human soldiers and, like their flesh and blood brethren, respond to gestures and voice commands. They're also capable of carrying – and using – lethal weapons like grenade launchers and machine guns on command.

The 350-pound (159-kilogram) Modular Advanced Armed Robotic System (MAARS) machines run about $300,000 a pop, but proponents say that cost is easily justified if the robots can eventually be used in place of human soldiers. Not only might that cut down on physical risks, but it also may help soldiers avoid some of the mental and emotional issues – anxiety, post-traumatic stress – that can come with a tour of duty.

Also in development is a pack animal-esque robot prototype designed to make human soldiers better fighters by lightening their loads. The Legged Squad Support System (LS3) is a roving set of next-level mechanical bulls, headless machines that look like bulls or pack horses. These robots are more of a complement to than a replacement of human boots on the ground, lugging gear and serving as a mobile auxiliary power source. The goal is for each semiautonomous machine to be able to "carry 400 pounds [181 kilograms] of a squad's load, follow squad members through rugged terrain, and interact with troops in a natural way, similar to a trained animal and its handler," according to the Defense Advanced Research Projects Agency (DARPA), the technology's developer.

Meanwhile, researchers at Johns Hopkins University are working on the next generation of robot bomb disposers. This one features a two-wheel torso that makes the machine more agile and prosthetic limbs, like those designed for humans, that can curl up to 50 pounds (23 kilograms) and pinch with the force of up to 20 pounds (9 kilograms). In addition to remote control, the bots can be operated via telepresence gloves that let the user move the machine's arms and hands by simply moving his or her own arms and hands, as well as a motion tracking headset that allows the user to see what the robot sees.

In 2005, Special Weapons Observation Remote Reconnaissance Direct Action System(SWORDS) machines became the first armed ground robots to see action on the ground when U.S. military forces put them to work in Iraq. Equipped with light machine guns, the robots were also mobile, but skittish military officials opted to keep them in fixed locations where they were used to defend perimeters rather than actively chase after bad guys.

Military officials have yet to OK the use of armed bots that can shoot autonomously, maintaining that the decision to use deadly force should ultimately be made by a human. But armed robots are being developed to do more than just play defense.

Warfare has changed drastically over the years. Here’s what we think the future of warfare has in store for us even as we hope that the question becomes purely academic. What’s your prediction about the future of war? Let us know in our comments section.

According to the narrator in "Fallout 3," war never changes. Philosophically, he may be right. But when it comes to tactics, strategy, equipment and the theater of war, he couldn't be more wrong.

What is the future of war? If we base our predictions on today's conflicts, we have several different scenarios. Some involve using technology to minimize risk. Others involve the riskiest technology to date -- the power of the atom.

Let's begin with the war on terror. This war is different from previous wars -- it's a war against ideology rather than another nation or state. It's challenging to wage this kind of war -- the leadership and resources of the enemy are spread out across the globe. There's no centralized capitol city to target, strategic land to seize or enemy army base to focus on. Warfare may occur in the streets of cities with enemy targets adjacent to buildings full of innocent citizens.

Based on this model, wars of the future will be fought between relatively small, mobile squadrons with versatile equipment. A key element in this kind of warfare is intelligence. Gathering the right information, processing it and acting on it is key to engaging the enemy without risking innocent populations. In the future, we may see robots used to help clear out enemies, keeping our soldiers out of harm's way. When only human soldiers will suffice, we'll see them carrying equipment allowing them quick communication to coordinate efforts as efficiently as possible.

What about nuclear war? During the Cold War, proliferation of nuclear weapons became a serious problem. The United States and the then USSR competed fiercely to build more warheads and missiles. At the end of the Cold War, both nations began to dismantle their nuclear programs. But since then, other nations have joined the nuclear powers and tensions between countries have renewed. Could the future of war really be a nuclear strike?

If it is, the entire world will feel the consequences. Nations spared a direct attack may have to deal with nuclear fallout. The impact on the global economy will be so vast that every life on Earth will be affected.

Could we see another war like World War II, in which armies, navies and aircraft clash? That sort of global conflict doesn't seem likely but it remains a possibility for isolated wars between smaller nations. What do you think? What is the future of war? Share with us your predictions in our comments!

10 predictions for the toy industry in the year 2022

The 6 best processors for designers and artists

The far out and futuristic cars of CES 2020

Could soldiers silently communicate using brain signals in the future?

How realistic are sci-fi spaceships?

How the home of the future could keep you healthy

12 Fascinating Foods of the Future

Should you buy a sleep training headset?

World Of Tomorrow Ideas and concepts. New Amazing Devices and Next Generation Possibilities ...